Located at the intersection of Granite and Curtis Streets in Pigeon Cove, the “Old Castle” is an iconic landmark. The exact year it was built is not known. It is, however, believed to have been built in 1712. Its 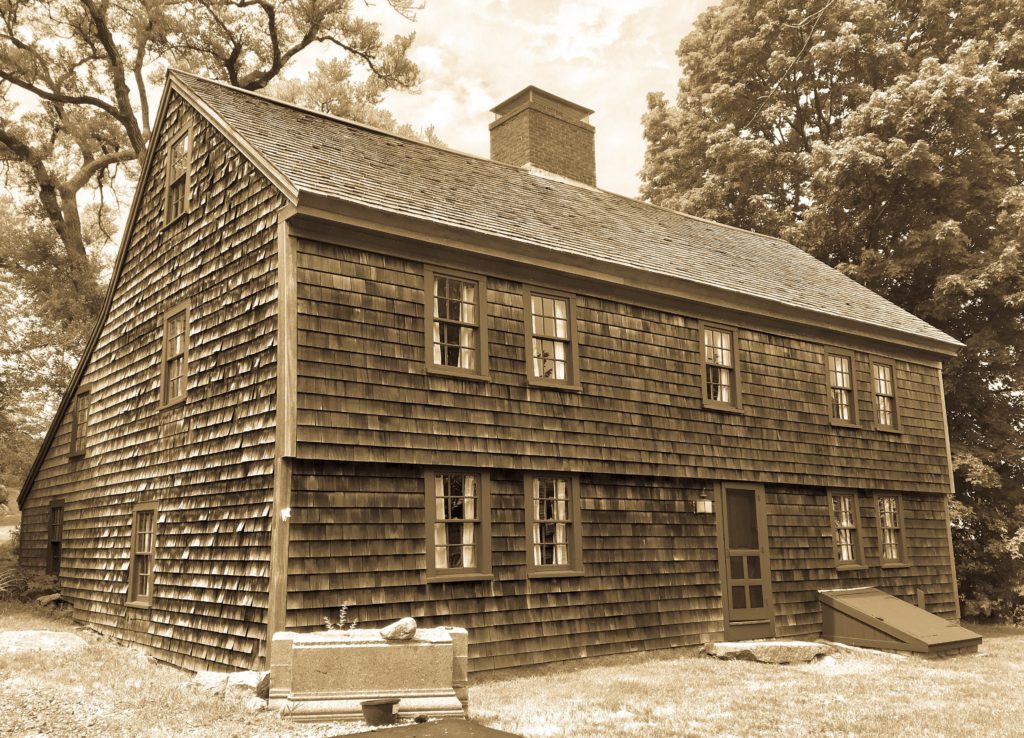 first owner was believed to be Jethro Wheeler, a cordwainer (shoemaker) from Rowley, who came here with his wife and nine children in 1713, and whose family lived in the house for six generations. Since the oldest of his sons, Benjamin, had 10 children and Benjamin Jr. had 11, while most of their siblings were equally prolific, it seems safe to say that several-hundred present day Rockporters can trace their ancestry back to the Old Castle.

Jethro Wheeler bought the property from Joshua Norwood in December 1712, but whether the beginning of the present structure were built by Joshua, or earlier by the illegal woodcutters who erected several crude cabins along the coast, or by Wheeler himself, is uncertain. The belief that a structure of some sort existed on the land before 1714 had led the Sandy Bay Historical Society, present owners of the Old Castle, to hire a dendrochronologist from Oxford University in England to take boring from oak timbers to compare with a large database of results from similar boring in order to determine the exact age of the building. This new science may finally solve the mystery of the Old Castle’s origin. The results showed that the building was probably constructed in 1712.

Probably the most persuasive evidence pointing to a date earlier that 1714 for the Old Castle is that Wheeler paid Norwood 150 pounds for 100 acres, and although there was no house mentioned in the deed, it did include appurtenances. 150 pounds would have been a large amount in those days simply for rocky woodland in such a remote area-there were only seven families living on the “back of the Cape” at that time.

In 1724, Jethro deeded “all my farm houses, buildings etc.” to his son Benjamin. Benjamin, is turn sold the property to his son Benjamin in 1769. Benjamin Jr. in 1792 deed the western part of the Old Castle to son John Dane Wheeler ” in consideration for 28 pounds expended and laid out in building a back lean-to or long kitchen room the whole length of my dwelling house.” We know, therefore, that the lean-to and kitchen fireplace were built almost one hundred years after the main part of the house. 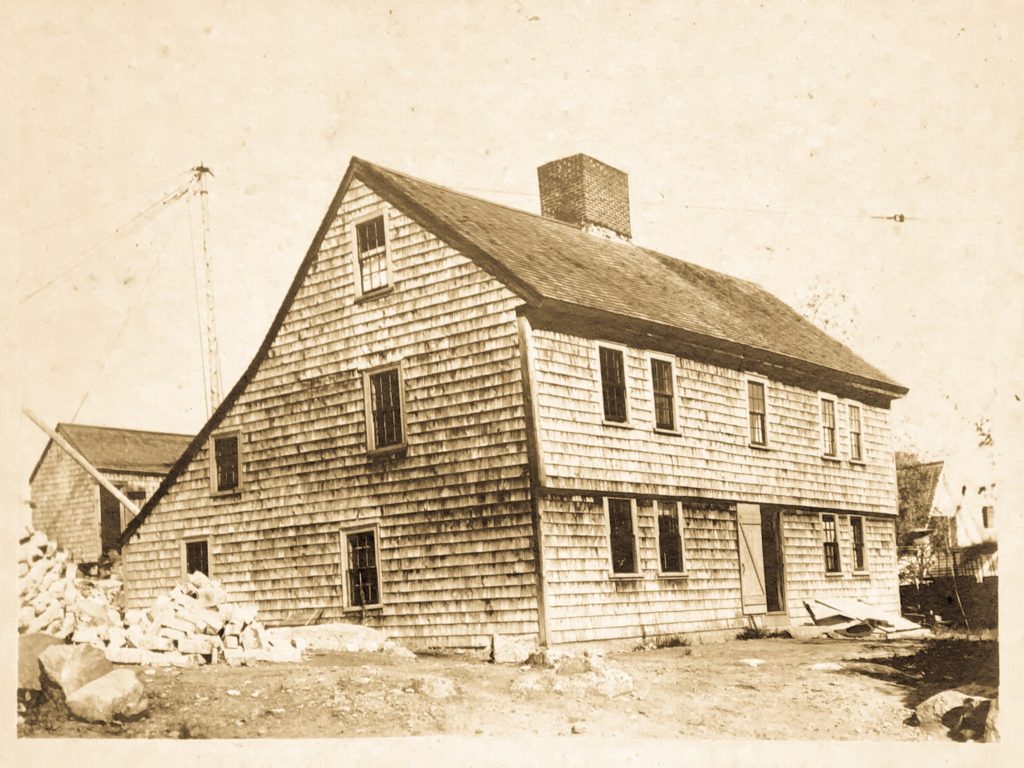 Various Wheelers continued to own the Old Castle for another hundred years, but during most of the 1800s it was rented to other families, usually four at a time- two up and two down. Then during the 1890s it was sold to Henry L. Story, who lived just down the hill in what became the Story Library. Henry’s wife, Abbie Story, was the leading force behind the founding of Pigeon Cove’s Village Improvement Society in 1889. Henry Story repaired the entire dwelling in 1893, and forty years later on 6 March 1929, their children appreciating the historical value of the house to the entire community, gave The Old Castle to the Village Improvement Society. The deed stated that it was ” the mutual interest of the Story family and of the society that The Old Castle should be permanently preserved and maintained in the public interest as a New England antiquity and community center, and as a memorial to Abbie F. Story. The Society was to restore the building as nearly as possible to its original condition and to maintain it.

Mr. Thomas Williams, as historic architect and owner of the nearby Garrison( Witch) House, directed the restoration effort. Mr. Williams believed that ” the character of the house” pointed to a date earlier than 1712 when Jethro purchased the land. He conceded, however, that although the house is a first period saltbox, Mr. Williams stated that because of the many changes made during the years, the work undertaken in the 1930s is not a restoration to any one period, but rather a cross-section of the house’s history. “At one time or another,” he says, “All three of the principal rooms on the first floor have been used as kitchens.” He concluded by saying, “The overhang died out early in eastern Massachusetts and its occurrence here strongly points to an early date for this house.” The building is on the National Register of Historic Places.

The Village Improvement Society tried nobly to fulfill its obligation to maintain The Old Castle, but deaths of founding members and the transition to a more mobile society over the next half-century took its toll on the organization. VIS contracted in 1987 with the Society for the preservation of new England Antiquities (SPNEA) to do an Existing Conditions Report in the hope that SPNEA would take over the responsibility for the building, but this would have required an accompanying trust fund of at least $50,000- far beyond anything VIS could hope to raise.

The VIS dissolved that year, asking the Sandy Bay Historical Society to take over The Old Castle. Although, at the time, its own financial reserves were not in a very healthy state, SBHS agreed to become custodians of the property rather that let it disintegrate further. The Historical Society has kept up with routine maintenance. In 2004, the Society was awarded a grant for $36,000 from the Community Preservation Act for funds to restore the foundation of the building and other structural aspects of both the exterior and interior of the building. The Society has also been able to restore the cornerboards, and other aspects of the building. In 2007 the Society hopes to receive another grant from the CPA funds to restore the roof and preserve The Old Castle.

The Old Castle is one of the very few remaining saltboxes in Essex County and, as far as we know, the oldest building anywhere on Cape Ann that is open to the public. It is a true treasure, well worth preserving and deserving, we believe, of community support.